An early apology.  I found that I could not cut and past the matrices necessary for this post. Therefore I had to copy my PC screen and past it to the post. This leaves the some of the matrices looking divided. I must ask you to join them together mentally. This should not be too difficult considering that the words within the intersections logically join them together. My deepest apologies in advance.

The following set of matrices are those that would assist in breaking down relationships and processes.  The subject of extension must also delve into how people may unconsciously have extended their class/ethics to their children and subsequent generations.To what degree might the agent (person making change) have been willing to: 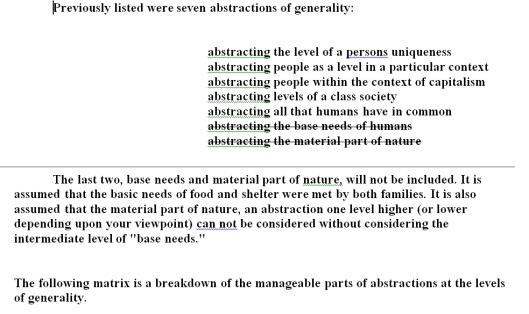 I would therefore suggest that the readers review all of the data found in the appendices and then modify or add to the above questions if they so choose.

The comparison of the two families with respect to social class and ethnicity is simply that Benjamin Birdsall and his descendants operated in a different social structure than Henry Birdsall and his family.

However, one would establish levels of socioeconomic structure;  Low, Middle,  and Upper Class    (and other intermediate levels if one so chooses).

If one is considering ethnic/culteral continuity in Henry’s strategy (albeit unrecognized by him as a strategy), his practices supported that continuity, a continuity that demotes conflict and promotes interpersonal relationships on a purely social and spiritual level.

If one is considering social/economic continuity in Benjamin’s strategy (and I am sure that Benjamin would have a conscious strategy) his practices supported that continuity, a continuity that faces conflict head on and promotes interpersonal relationships on a mutual-benefit basis.

Regarding socioeconomic levels Henry appears, from the inventory of personal property established at his death, to have accumulated more than Benjamin. The anomaly in this comparison is that Benjamin’s Last Will and Testament is missing. Any real property would have been listed in that document. Therefore Benjamin’s economic accumulations may have been based in real-estate, and that may well have been quite significant.

Due to the luck of the draw it also appears that Benjamin’s descendants had a continuity of male heirs while Henry’s descendants leaned more towards female.  The Birdsall name, carried on by Henry’s male heirs, died out within three generations. The Birdsall name, carried on by Benjamin’s male heirs, expanded and grew. This may lead to a perception of economic growth supported by the continuity of the family name. Only additional studies would carry this to a sufficient end.