John Bessac was at peace with the world. He had his family, his farm and his past times along the riverbanks and hillsides of the Chenango Valley.

It was 1822 when John noticed that when he shaved a spot on his chin would become irritated. John solved the problem by allowing a beard to grow around the area. In fact, John came to like the idea of a beard.

The sore spot turned into a tumor.

By the end of the summer the tumor created a sharp and constant pain. John’s normal exuberant personality seemed to ebb. Anah talked John into visiting a doctor in Albany who specialized in such things. John agreed and took the rutted pathway that was soon to be called the Susquehanna Turnpike. 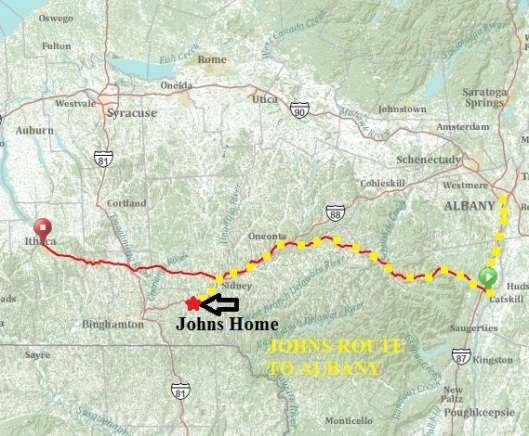 John received no medical relief in Albany. However, while there, he sought atonement by making an overdue confession and attending mass. It had been several years since he had attended mass.

He was not able to cheer Anah by telling her that the tumor had been taken care of. His heart was heavy due to the solicitude of Anah and his children. He had always been independent and wished not to be waited on. But once again John was able to bring himself back to a semi-normal life.

John Bessac lingered for another two years and passed away in the spring of 1824. He was peacefully put to rest on the banks of the beautiful river which in life he had loved so much. John rests under a small hillock shaded by stately elm trees. Their branches lean over and toward him as if to say;

“Here lies a man who represents all that is true, honest and right with the world; John Bessac.”

The following is from Esquire George Park’s mid-1800’s pamphlet about John Bessac. 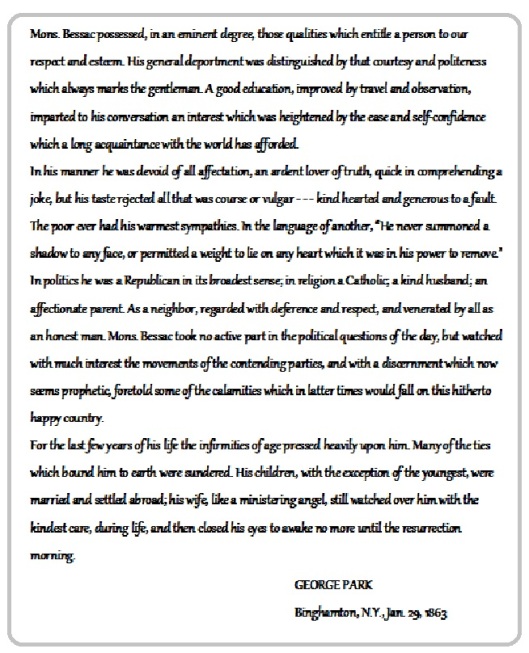