In September 1877 I was arrested for riding a horse on a footpath and locked-up for the night.

In the morning I was escorted by four policemen. Four of them mind you. But I took flight and saw a shoemakers shop to hide in. The shoemaker helped the police to subdue me. Now that is five people. Five of them mind you. I wriggled around as they tried to put the wrist bracelets on me. I almost got away but my trousers were ripped so bad that they kept on tripping me up. Even with that I almost made it except for the dirty trick of Constable Lonigan. He grabbed me where no man should be grabbed. And then he squeezed until I submitted to the bracelets.

But I got even. Next time I ran into Lonigan I shot him – – – until he was dead.

Riding over a footpath wasn’t going to get me much jail time so they went after my friends.

The next month they arrested the Baumgarten brothers. They said that the boys were supplying stolen horses to me. Billy spent time in the Melbourne prison for it. That was the beginning of the law going after me through my friends and relatives; as you will soon see.

My dad died and my mom married a guy from California. He said his name was George King but we were never sure about that. My new father, my brother Dan and I made a little pocket money rustling cattle. It was a good life. 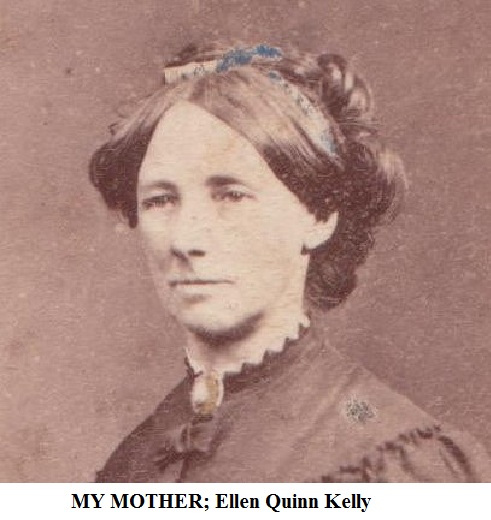 Now some people thought that the police station at Greta, Victoria needed a little help. Constable Alexander Fitzpatrick was ordered there for relief duty.

The good Constable Fitzpatrick rode to Benalla. For what purpose I have no idea. He claimed that he had been attacked by me, my brother Dan, my mother, my brother –in-law and a good friend Bricky Williamson.

Fitzpatrick told a magnificent lie. I think he was trying to establish his credentials at Greta. He claimed that all of us had revolvers. He added to the lie by saying that I had shot him in the left wrist. But it didn’t stop there. He also said that my mother had hit him on the helmet with a coal shovel.

Later he admitted that my mother did not have a gun. Bricky and my brother-in-law were arrested. Me and my brother Dan disappeared into the bush. My mother was taken into custody along with her baby.

Next time I saw Fitzpatrick I shot him – – – until he was dead.

Then came the time I shot Kennedy, Scanlan and Lonigan. It was another nice October. The year was 1878 and the place was Stringybark Creek. I clearly remember that because of the reward posters.

Here is the way I remember it.

They looked up, and saw us four armed bushrangers. Three of us were carrying guns. I had two rifles. They didn’t recognize my friends but one of them recognized me.

I shot three of them; one with extreme prejudice. That was Lonigan; the same Lonigan who had put the squeeze on me.

A fellow by the name of McIntyre got away and reported the incident. They gathered up a Sub-Inspector and eight townspeople. McIntyre led them back to the bodies.

The story that they tell is that it was two o’clock in the morning when they got to the scene. Now they also say that they only had one revolver and one gun. Does anyone really believe that a bunch of skimpily-armed people would go after four well-armed bushrangers in the middle of the night? I think not.

I stole Kennedy’s gold watch. What’s the use of a watch to a dead man?

Even though they had a reward out for me and my bushrangers they raised it to 500 pounds. Then they got the parliament of Victoria to pass a law that outlawed our gang. The law was called the “Felons Apprehension Act.”

I liked the sound of that. It had a nice ring to it. The law included a specification that whoever found us had no need to arrest us. They could shoot us on sight and thereby avoid the cost of a trial. 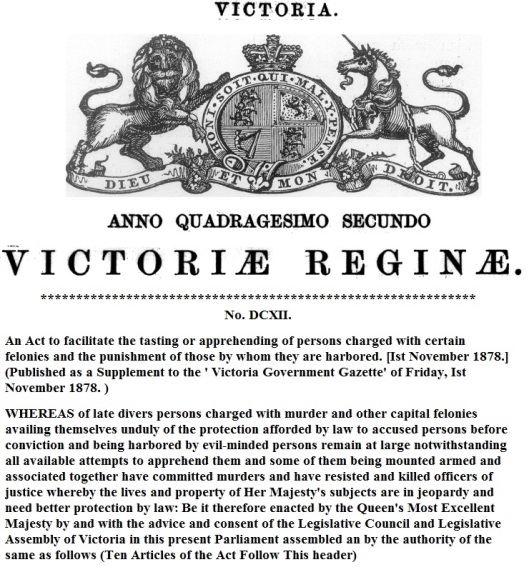 Later on I found out that the parliament had copied the law from New South Wales. It seems as though the Ben Hall Gang scared them as much as we did. 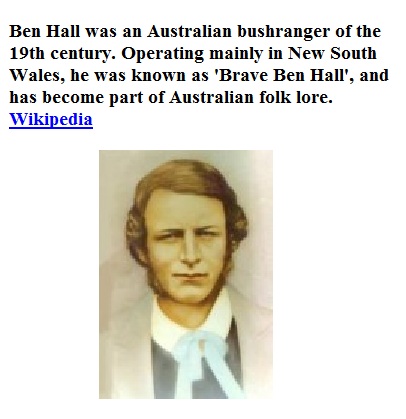 Then we did a few Bank robberies. I remember one in Euroa and one in Jerilderie. We can get into the details later.

People said I had no heart.

What did they know. They never lived in my boots. If they wanted to wait one hundred and fifty years to say “Ned Kelly has no heart” then it would be fine with me. The VIFS portrait of me clearly shows I am lacking a heart; and a head.

I think I will leave it right there. If you wish to hear more about me stop by in a day or two and we can talk.

2 thoughts on “BEHOLD ME! For I am Ned. Post 4; Bushranger Duties.”