Rules for Voluntary and Involuntary Entry

It can be honestly claimed for any well-managed Inebriate Asylum that it “reforms ” a man by helping him to reform himself ; it presupposes in him a sincere longing and an earnest effort, and it offers him wise moral conditions of patience, encouragement with kindly admonition, trust with well-timed warn­ing, refuge from care and from tempta­tion, cheerful and sympathetic compan­ionship, improving and diverting mental exercise, and all the devices of sagacity and tact which his temper or his trou­ble demand; sound physical conditions, also, of rest (for there’s no such tired wretch as your worn-out inebriate), reg­ularity of habit, wholesome and substan­tial diet, pure air, free motion, animating games, hearty songs, and jolly laughter. And that is all – that is not humbug. 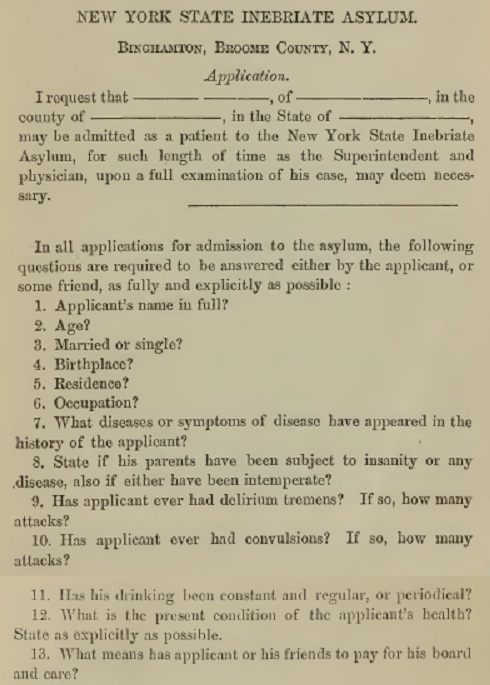 Such are they whom it truly helps and such the means whereby it helps them. For the incorrigible minority, the puerile, and the stupid, who remain “deaf to the voice of warning, and de­fiant of the claims of affection,” – the unstable and the stolid, who are yet to be “dead-beat,” – these are they whom the Asylum merely harbors. To the former it is, in very truth, a House of Refuge, rest, and redemption; to the latter, but a House of Detention and control. In this Institution, which, in all that is external to the personal feel­ings of the inmate, partakes notably of the freedom of a superior country hotel, we are fortunate in being able to meet on an equal footing of confidence and respectful consideration. But for causes seemingly inseparable from the experi­mental character of the enterprise, our social status is exceptionally superior and it is not to be expected that, when the plan and operation of inebriate re­form shall have become popularized, and every State shall have opened its asylums, kindred establishments will be commonly so fortunate. I think it will be found necessary to impart to their discipline a duplicate discretion, and to classify patients, however simply, as to character and privileges.

7 thoughts on “17. THE INEBRIATE; Classifications – Voluntary or Incarceration?”