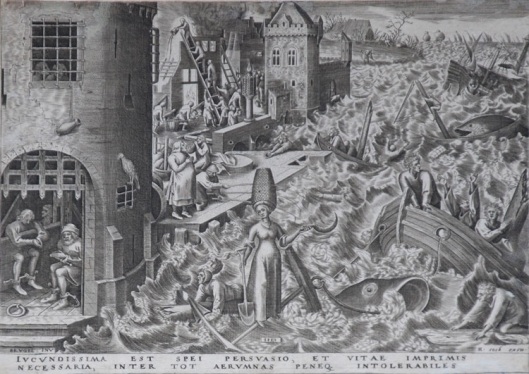 The Virtue of Hope by Brueghel the Elder, Pieter, circa 1560

They, however, would only depart these caves with their wings,

fluttering beneath the moon, they dared to leave,

their mates alone, at night, subject to Lucifer.

These beings were of separate types.

Most were in their youth.

There were older beings,

but they failed us.

Youth had failed these aged men and they in turn failed the youth that surrounded them.

Archie led Fred through the movements of industrial production.

These movements were mystical as those of the alchemist.

As ordered as the stars were these movements.

Place the pills into the fire of microwaves.

Then move them to the toothed maws,

of the cold steel  heartless machines.

from the heat of,

Repetition upon repetition shall be thy fate.

Seek coolness for thy weary body,

and heat for thy poor soul.

It was to come that Fred challenged the will of automiton,

and the machine was not to be challenged so lightly.

Woe unto him who challenges without due care.

Fred did not flee the trepidation of machine.

Machine begged its teeth to be sharpened.

It was obliged and responded,

And Fred said to those who would listen

3 thoughts on “A DEVINE TRAGEDY: 11. WITHOUT HEART”