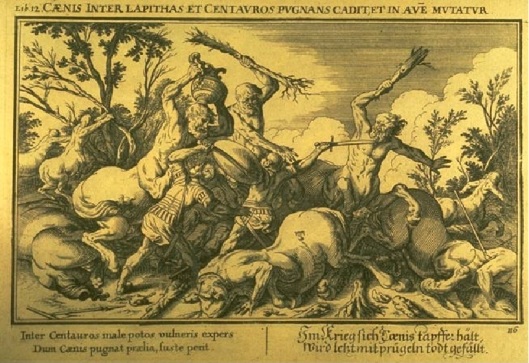 Cenee and Centaurs Engraving by Bauer for Ovid’s Metamorphoses

Without a ringmaster to control the timing of the acts other eerie things occurred.

A group of men walked out into the middle of the circus ring, careful not to fall over the stupefied sheep.

Amazingly, these men all looked alike; nose for nose, height for height, hair color for hair color. All appeared to be from the same family or inbred by some fault of nature. All had blue suits, white shirts, ties and wing tip shoes. They moved with precision. All to the left. Then all to the right. Their arms were precise also. First up, then down, then in a motion that stated “NO!” They danced and danced until sweat ran from their collective brows.

And the sweat ran until the grease paint on their faces started to run. It was only then that the audience could see the true features of the dancers. They were all donkeys! Some old. Some young. Some of the older ones appeared to lead the macabre dance which continued on and on. It was a monotonous dance without any creativity. Just back and forth and up and down. Every once in a while a small bray would escape the lungs of a younger donkey. This would break up the monotony of their actions but would change nothing.

The dogs and the clown-owls and the donkeys continued with their separate acts. The sheep just lay in the sawdust that covered the circus ring floor and trembled. The man in the leather apron appeared dejected and sat on the edge of the ring as his small motorcycle laid on its side sputtering and smoking; wheels still spinning in the air.

Tomorrow: “The Circus Acts Continued, Book 49, Verse 3, The Nun and the Acrobats”