So there I was, working as a railroad detective (not much detecting – – – more like nabbing hobos and bums hanging around the tracks) in Scranton. It was a far cry from my life of the tenements in New York City. New York may have been the calling card for immigrants but it turned out to be the death of many of them.

So far I had seen the magnificent rail yards and how they worked; the precise queuing up of tankers and coal hoppers and passenger cars and extra engines. The yardmasters were geniuses far ahead of their times.

Then I heard about the Starucca Viaduct and bummed a ride to Susquehanna, Pennsylvania just to see that magnificent structure. It really was one of the wonders of the world.

Everyone had tales of this and that. It was Bugdon Yelcovich who told me about the glacial pothole in Archibald. I could not believe it until I saw it with my own eyes.

And now everyone is wondering about the gravity railroads and how much longer they have before the canals wipe them out.

These gravity railroads run on a few different principals.

The other gravity railroads have steam engines mounted to bedrock. They pull the loaded cars up the mountains. Then gravity pulls them down the other side. Cables, once again, keep everything under control.

There are short hauls and long hauls. The longer ones take the coal to a canal that runs from Hawley, Pennsylvania to the Hudson River. That one is owned by the Pennsylvania Coal Company. The shorter run is owned by the Delaware and Hudson Railroad Company and meets the canal at its beginning in Honesdale.

The canal which runs between the Katskill and Shawgunk Mountains is owned by the D&H. It empties into the Hudson River at Kingston, New York. The coal is then floated down to New York City for all those immigrants to keep their homes warm.

Bugdon Yelcovich gave me this map so I could show you more clearly than I am able to put into words. He even circled the gravity railroads near Scranton so that I could see it better.

Damn eyes – – – I am going to have to get glasses pretty soon. 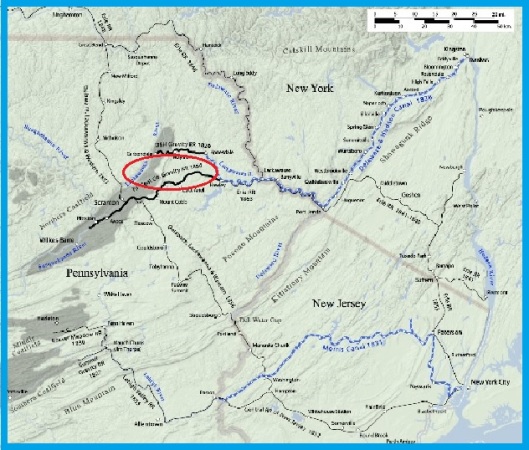 3 thoughts on “AS I WANDERED #4 GRAVITY RAILROADS”