In the meantime, while these events had been occurring in the country of the Naymans, where Vang Khan had fled, I was in control of everything that Vang Khan once held. My victory in the battle was complete. It was a very great battle if the number slain, which it was said amounted to forty thousand, is a good measure of battles. These numbers are, however, greatly exaggerated. And then, besides, the number slain in such barbarian conflicts was always much greater than it is in the better-regulated warfare of civilized nations in modern times.

At all events, I gained a very grand and decisive victory. I took a great many prisoners and a great deal of plunder. All those trains of wagons fell into my hands, and the contents of many of them were extremely valuable. I also took a great number of horses. Most of these were horses that had belonged to the men who were killed or who had been made prisoners. All the best troops that remained of Vang Khan’s army after the battle came over to my side. They considered that Vang Khan’s power was now entirely wasted, and that thenceforth I would be the acknowledged ruler of the whole country. They were ready to transfer their allegiance to me. 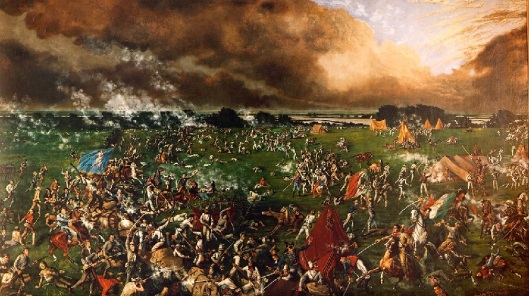 I received the news of Vang Khan’s death from my father-in-law Tayian. I then proceeded with more ambition and activity to take possession of all Vang Khan’s territory. The khans who had formerly served under Vang Khan sent in their alliance to me; one after another. They not only knew that all farther resistance would be useless, but they were, in fact, well pleased to transfer their allegiance to their old friend and favorite; me!

I made a triumphal march through the country, being received everywhere with rejoicings and acclamations of welcome. My old enemy, Yemuka, had disappeared. Yemuka, who had been, after all, the leading spirit in the opposition to me, still held a body of armed men together, consisting of all the troops that he had been able to rally after the battle, but it was not known exactly where he had gone.

2 thoughts on “GENGHIS KHAN; my own words #56 The Re-Alignment of Adversaries”