I have a limited and waning memory, in a human form of artwork — charcoal on slab wood – that echoes an image of a Dr. W. Seward Webb; “Seward”, as he was known. He was the man who presided over the building of the Adirondack and St. Lawrence railway. This memorial is displayed in a saloon in Chateaugay, NY. It may have been either the “Hay House”, “The Halfway House” or “The Chateaugay Hotel.” (Memory does not serve me well these days.) The rendering rests above the bronze spittoons and brass rails that kept the inebriates’ elbows off the bar. This, my fellow humans, is the remainder of illusive depths and echoes that at one time had  joined together to make up a thriving town. 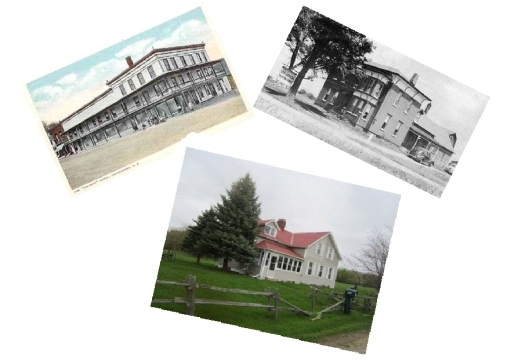 I asked Hemingway if he had ever visited Chateaugay which was located just north of the Adirondack Blue Line. He admitted that the farthest north he had ever been was Aiden Lair. I thought to myself that at least the Deep North Woods had been spared his chatter. But he did say that he had once played poker with Dr. Webb in a hotel bar in Long Lake.

In Webb’s lifetime, he suffered from a driven reality, as do so many men of honor. Once dead, as is typical, he was even more the leader than he was when alive. He was tall and enthusiastic, and his unique beard had once been black. It is my understanding he was a native of New York City and graduated as a surgeon from Columbia College in 1875.

He met Lila Vanderbilt in 1877 and they married in 1881. They had four children: Frederica, James Watson, William Seward, Jr., and Vanderbilt. In 1883, Seward entered the Vanderbilt family railway businesses as President of both the Wagner Palace Car Company and the St. Lawrence & Adirondack Railroad. He and Lila often hosted state and national dignitaries at Shelburne Farms, including Presidents Theodore Roosevelt and William Taft. [1]

In his later years, Seward would go to his Adirondack Great Camp named NeHaSane, a game preserve of some 200,000 acres, to commune with  a cliff and a few Tamarac trees.

He and my great uncle had entered into one of those close (the adjective is unwarranted) friendships that begin by not sharing secrets and very soon dispense with conversation. They once carried out an exchange of books and newspapers and engaged in noisy poker games. However, those days had long passed.

My memory of Seward  was him sitting on a lodge porch, with a medical book in his hand, sometimes listening to the irrecoverable echoes of the railroad. One afternoon, we spoke of fishing at Chasm Falls (where rapids sing in western culture’s key of C). Seward said that he was considering a visit to High Falls (where the roar echoes the eastern culture’s sad key of Ab-minor).

He added that the idea of the visit had been sown via a story orated by Norwegian metaphysician who lived in Brushton. Nothing more was said – may God have mercy on his soul – of fishing.

In September of 1926 Seward Webb died of an addiction to morphine.

That evening I casually mentioned to Hemingway that I had a strange book in my possession . Ernest pleaded with me to divulge the contents of such a book and how I came about possessing it. Much to my chagrin – before I even realized it – he had wedeled the story out of me.

A few days before Webb’s death, he had received a sealed and certiﬁed package from Blodgett Mills, New York. It was a book in large print. Webb left it at the bar in Chateaugay where – months later – it was turned over to me by the bartender. I untied the string that held it together and studied the plain brown wrapping which declared “TO: Dr. Webb, Shelburne Farms, Vermont.” There was no return address, however it did have, as I earlier stated, a postmark of Blodgett Mills, NY.

The book was in English and contained 999 pages. On the tanned leather spine, I read these curious words which were repeated on the title page: The First Philosophical dictionary of Mlãn. Vol. VI. Realth to Regnaj. There was no indication of date or city of publication. Also, on the Title page, which lay between two thin gold foils of the same size, there was a raised stamp with this inscription: THE FIRST EARTH.