Oh, there you are Miss Lust,

I missed you last night,

I went looking for you,

from bar to bar,

You fool me sometimes,

I think I want you,

when I find you,

You are a fickle young lady,

And you disguise yourself,

Even Eros has fallen,

Is that what it is Miss Lust?

Is your beauty everything?

Or is it something else,

that clouds my mind?

You hold out promise,

you do, Miss Lust.

Why do you offer Promise?

I offered you naught,

in return for it.

In fact I hate Promise,

and his son, Hope,

Do you masquerade as Succubus,

And you wish me to be,

It will be so if you would only ask,

I sacrifice my life for one night,

with you Miss Lust, just ask.

I will be prompt, I will!

My reasoning and prudence,

are not shields against you,

I think it better to avoid looking,

Better that we never meet,

of those many aroused nights,

upon both our minds.

Why do I keep seeing them,

Miss Lust? I hope not to.

They and you should,

So is it Love,

Oh, if we only knew,

There sits a gift on a half-round table.

The half-round table is covered with a hand crocheted piece of artwork; forty rounds of popcorn stitch all joined together to make the coverlet. The coverlet is made from the extra rounds of a bedspread that my wife made. The bedspread contains one thousand rounds of the same stitch; two years of part time effort.

Beside the gift is a clear vase, square in shape, eight inches on a side. It is filled with tiny pebbles; some square, some round, some simply flakes of pink. These hold the blue hydrangea which is visible through the front window. On the other side of the vase is a miniature porcelain basket with a matching pair of miniature porcelain shoes. The porcelain pieces are decorated with pink flowers and green vines. These are a reminder of her visit to Ireland. Next to the vase and the gift is a simple hair brush.

I use it to comb her hair; she is no longer able to.

Also on that side of the vase are two hummingbird figures. One is a gold candle-holder with two crystals enhancing the wings of the bird. The other is a sun catcher; a hummingbird in pewter with a crystal flower hanging in front of him. These are also gifts; from her son and grandsons. She fell in love with them when they brought them – – – some number of years ago.

I am sure the memory no longer exists.

The gift – – – that we should get back to – – – is a soapstone carving. It is made of two pieces; one tan and one dark brown. I bought it for her while I was on a business trip to Toronto. It came from a small store in Chinatown.

That was almost 40 years ago.

As I sat and looked at the gift, for all those years, I realized it was really not something that she would have bought for herself. It is rather crude and ugly even though someone, somewhere, put a lot of work into it. As I have said; it is not something she would have bought for herself. Her tastes are more refined. I am not sure I said that correctly; I probably should have said that her tastes are daintier. But that is not the word I seek either. Her taste is more sensitive – – – yes, that’s it – – – more sensitive – – – like she was.

She was very sensitive to others; now she doesn’t recognize them.

But the gift – – – the dark brown base simulates the waves in a pond undulating gently with a hint of foam where they hit the shore. Other than that the base remains unremarkable, not to negate the workmanship. The base is more functional even though it lends a bit of nuance to the overall piece.

The upper portion of this soapstone carving depicts two ducks facing each other. They appear to be having a conversation. They sit alone and atop another layer of pond; this one in light tan soapstone, as are the ducks and remainder of the piece. The ducks are separate from the background which is a frieze of delicate latticework. This frieze makes up the stems supporting a lily pad and a lotus blossom.

But the gift is a strange one. Is has changed its meaning. I bought it for her but she has given it back to me. I mentioned that it was not really her taste. If she had bought it for herself it would now be tucked away on a shelf somewhere in the house. Every time I looked at it I wondered whether I had really bought something that she liked. When I bought it I thought she would enjoy the artisan work and the two ducks. I thought that possibly the two ducks would remind her of the two of us. We often walked and had long conversations.

That was long ago; when she could walk.

But the more I looked at the gift I realized that it did not match anything that she had picked out for herself.

That was when the gift had changed its meaning. She had turned its meaning around by constantly displaying it. It was her gift to me. She was saying “Even though it is not my taste I display it for you, so you will know how much I love you because you thought of me.”

And that is her gift. It is her gift to me and to everyone she has met. She puts them before herself. Her time was there for others. Her patience was given to others. Major portions of her life have been donated to others; some family, some friends and some merely acquaintances.

That is the gift; her gift. 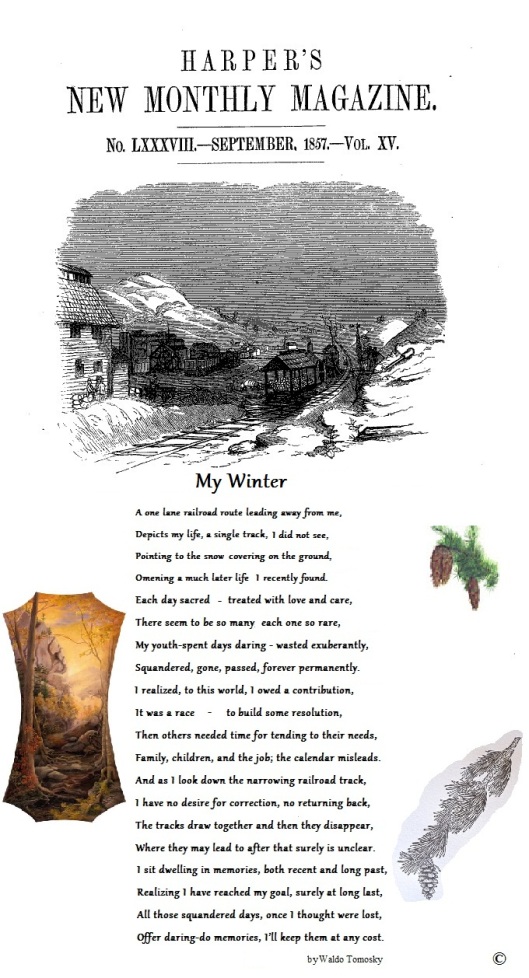