The land that Henry Birdsall bought ranged from the mountaintop to the river valley below. It is 95% forested but if you scan through the trees you can see the farmland and river far below.

The Birdsall property is severed in half by two transportation routes. The first is an abandoned canal. The second is a macadam road that runs parallel to the canal. The canal cannot be seen from the road due to overgrowth. Both routes sit at the bottom of the hill.

There are two house foundations, one privy foundation and five springs. In addition there is at least one corral area and another possible one.

Dug features are one switch-back road leading to a plateau half way up the steep hillside, one dug road on a bias from there to the top of the hill, two quarries and a laid up stone wall. Additionally there is a unique small grassy area at the top of the hill which may be the other possible corral area.

Some features of the original Birdsall farm are the abandoned canal, one canal lock, one residence and the Birdsall family cemetery.

All of these features are on private property except, of course, the macadam road.

Standing on that road and facing the steep hillside the observer can see a small knoll. A house foundation remains on the top of this knoll. However, logging residue has been pushed into the foundation and there are few artifacts to be found without excavation; which was determined to be unwise without proper testing, recording and analyzing by a professional archaeological team with defined purpose.

The foundation is relatively square and fairly deep considering it was dug by hand.

Walking about twenty meters to the north, and parallel to the roadway, there is a spring. It is quite active and is repaired from time to time with an old iron pipe. 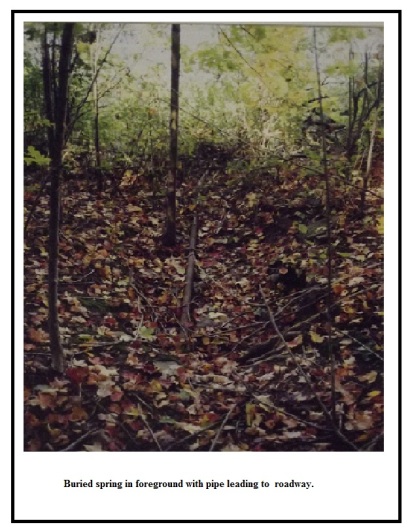 There is a second poor quality spring within twenty yards of this one.

There is another house foundation seventy yards north of these springs. It is rectangular in shape and appears to have had a shallow cellar or crawl space. There is a fireplace foundation on one side and in the middle of the long side of the house. This may have been a hearth if this dug area was used as the floor of the home. A small set of stone stairs leads down to this level.

The surface artifacts that were diagnosed came from nearby the top of this stairway. Details will be shown later. 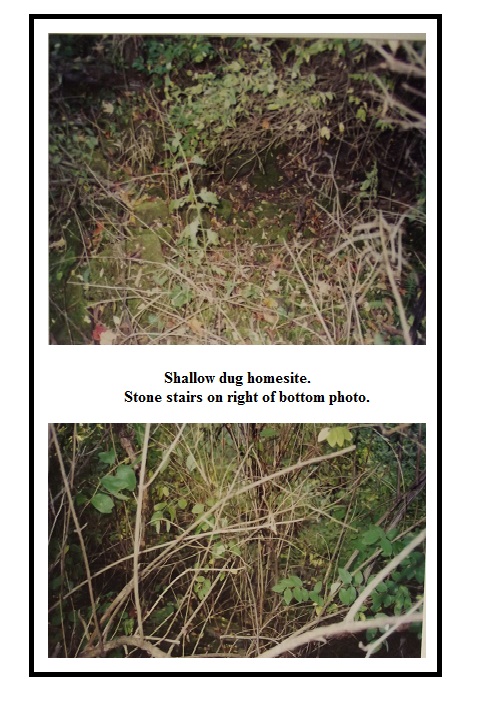 As noted the surface artifacts will be reviewed and analyzed later in the blog. The following are artifacts that remain in the shallow foundation and outside of the analyzed area. 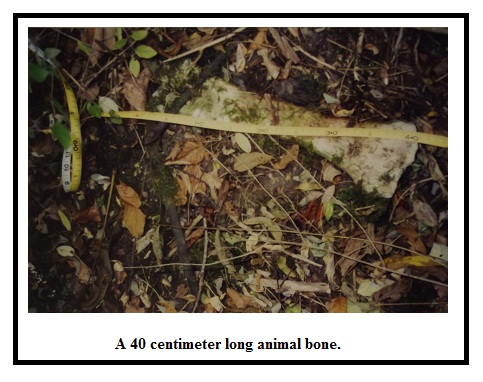 The main portion of the saw remains buried in the rubble of this second foundation.

Outside and a very short distance from this foundation is the foundation of a privy. The quality of the privy foundation seems to have outlasted the home foundation. This may be due to the small size of the privy holding up better to the freezing/thawing cycles of 100 plus years.

Proceeding northward there is a short dug road. It leads to an area that contains another spring and a corral area. There are no buildings remaining but it is obvious from the placement of stones that the area had been worked towards a purpose. The fact that it was away from the home site and that a switchback trail led away from this area that it must have housed working animals. The presence of two quarries along the hillside tends to confirm this supposition.

Beyond the corral area is the spring that fed Henry Birdsall’s home. To the right is the beginning of the switchback trail that led up to the first plateau on the steep hill.

The switchback road changed from left to right every twenty feet or so. This allowed animals to reach the first plateau with minimal effort. From that point forward there was a dug road that cut at a bias up the hillside. This was a substantial road that passed two quarries and reached the top of the mountain. At the top was another possible corral area and a fairly level place for animals to graze. Now forested, this land was at one time a pasture.

The quarries were very active at one time. It has been shown that although most of the canals locks were constructed with limestone the lock on the Birdsall property was constructed of sandstone. A comparison was made and the stone from the quarries is consistent with that in the construction of the locks. An assumption is made that one quarry was used for the three Birdsall homes and the other was used for the canal lock.

Once the top of the hill is reached it is fairly flat and was once pasture. This is where the possible second corral area was.

Once the top of the hill was reached the draft animals (used to haul quarry stone) could rest for the night.

The grassy area has survived 150 years of pasture and softwood growth and, as noted in the caption, thirty years of hardwood growth. This may indicate a corral area similar to the one at the bottom of the hill.