In retrospect – – – and in the face of possibly appearing rude, offensive, insolent or impolite – – – I have decided not to post anything about the contrarian “Mary, Mary.” I have been informed that the old English Poem may not have included ‘All pretty cuckolds in a row’ but rather was originally written as ‘All pretty maids in a row.”

Be that as it may, we move on to a more scientific element.

The following is a definition of cosmogenic according to WikiWacky or some other official source; damned if I can remember where I copied it from!

Cosmogenic isotopes are rare isotopes created when a high-energy cosmic ray interacts with the nucleus of an in situ Solar System atom, causing cosmic ray spallation.

I have it on an absolutely solid source that Cosmogenic means no such thing.

‘Cosmogenic’ is defined by my source as a beautiful woman who has had her picture plastered all over Cosmopolitan magazine; to wit:

Damn if she doesn’t remind me of ‘Mary, Mary.’

But back to Cosmogenic isodopes. Now I must admit that I have no idea what an ISODOPE is. So back to the internet sources.

Isodopes are vagrants of a particular chemical dependent.

That makes a lot of sense. How about ‘in situ?’

In situ indicates that the subject matter has been left in its original place.

(My source = Fred who is sitting on the bar stool three places to my right).

So what do we have so far?

A chemically dependent vagrant who has not moved from the same spot since he has been discovered.

Now, finally, we get to the last word puzzle; ‘Spallation.’

Spallation is a process in which fragments of material (spall) are ejected from a body due to impact or stress. In the context of impact mechanics it describes ejection or vaporization of material from a target during impact by a projectile.

Fred got knocked off his bar stool by some stranger, and a few teeth were ejected (spalled) from his mouth. Now about the vaporization; Fred’s girlfriend got ‘the vapors’ during all that excitement.

And so our definition of cosmogenics can now be completed.

Fred, who was in situ, was a chemically dependent vagrant who made eye contact with Easy Sleazy. Sleazy’s boyfriend hit Fred with a high-energy impact which caused his teeth to enter a state of spallation. The Isodopes involved were kicked out of the bar by the owner.

It was an exciting night. I wish Cosmic Ray would have been there. However, he was booked the previous night for the spallation of a window in a liquor store. Damned if I know why he just didn’t purchase a bottle before the store closed; but that’s Cosmic Ray – – – if you get my drift.

Now how in the world could I close out this missive without a cosmogenic photo of Easy Sleazy? It just wouldn’t be fair. 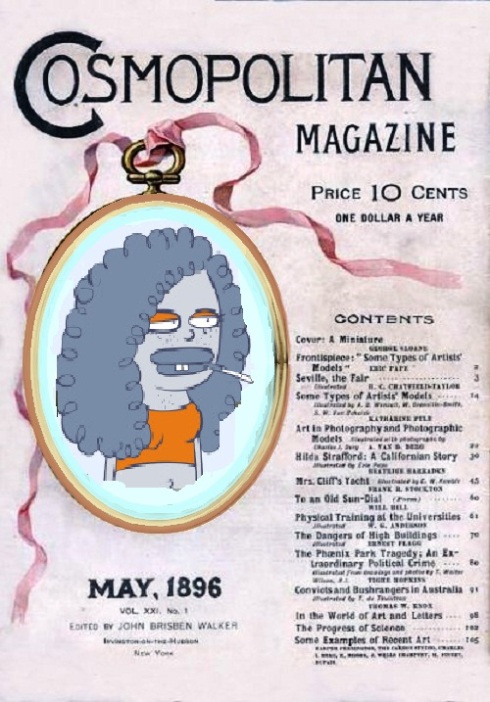 Maybe tomorrow we can talk about “The Cosmogony.”

Wouldn’t that be great?